‘I·SEOUL·U’ was developed as a relationship-oriented brand that can share and embrace the diversity coexisting in Seoul. It is a picture of Seoul connecting between the differences. Ha-rin Lee, the author of the slogan, said she got the inspiration for the Seoul brand while traveling across the subways.

Between people, there is Seoul.
• Between “you” and “I,” among citizens and among people all around the world…Seoul is at the center of all relationships.
• Seoul is a city where diverse nationalities and generations, mountains and rivers, ancient palaces and skyscrapers, and all disparate elements coexist in harmony.

Seoul fills the gap between the two dots, which represent passion and relaxation.
• The red dot next to “I” signifies passion, while the blue dot next to “U” symbolizes relaxation.
• Seoul is what allows everything to coexist in harmony, from “my heated passion” to “your calm relaxation.”

The new Seoul brand is open to all citizens through the open source business method so that anyone is allowed to change the design freely and turn it into products as long as he or she meets the minimum requirements. As the new brand was created by citizens, SMG plans to share it with the world and develop it further as a brand for global citizens beyond Seoul. 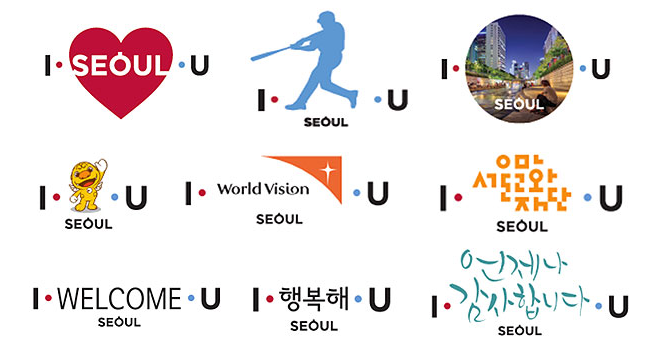 Of course, not all citizens were satisfied with the design. There were voices of concern about the lack of professional elements because the design was created by citizens. However, because the Seoul brand I·SEOUL·U has been awarded the “Communication Design” prize in the “2016 Red Dot Design Award,” one of the world’s top 3 design awards, run by the Design Association of Nord Heim Westphalia, Germany, celebrating its 61th anniversary this year, the worries of citizens were relieved a lot.