Unlike other cities or countries, Seoul Metropolitan Government (SMG) decided to create its brand by inviting citizens and people to participate in and lead the city branding project from the beginning stage, departing from the existing way of selecting a brand through presentation competition of specialized companies. It was because SMG thought the city branding project should be led by the people who live in Seoul and understand the city best.

After launching the “Seoul Brand Promotion Committee,” the first step taken by SMG was to invite citizens to create the “Seoul Brand Citizen Ambassadors” that would suggest extensive opinions and transfer the citizens’ voices to the city from the initial stage of brand building to the promotion and expansion stages after brand development. SMG put emphasis on the diversity of the group members by gender, age, occupation and area while selecting the applicants, in order to reflect the voices of people from all walks of life as much as possible.
On Tuesday, December 16th, 2014, the “Seoul Brand Citizen Ambassadors” was finally launched to participate in the process of Seoul brand development. Of the total 246 citizens selected across all age groups from a high school student to a 72 year-old senior citizen, around 160 citizens showed that they had great interest and strong intention by participating in the opening ceremony.

After that, SMG held “Town Hall Meetings” on the development of Seoul brand three times to collect citizens’ valuable opinions and to have discussions with them to continue the citizen-led Seoul brand development. Through the conferences, citizens of various ages and diverse occupations, including youth, elderly, foreigners and multicultural family members, were able to have heated debates on Seoul’s past, present and future identities and Seoul’s city brand. In order to promote citizens’ participation in various ways, SMG also sought to receive opinions from citizens through domestic and overseas preference surveys, on-line campaigns, open contests for slogan creation and design and evaluation participation.

At last, “Coexistence, Passion and Relaxation” were selected as keywords representing Seoul’s identity (Seoul-hood) by reflecting the opinions of both domestic and overseas citizens, experts and citizen governance collected on-line and off-line. Subsequently, SMG held an “International Idea Contest for the New City Brand of Seoul” to select the BI and Slogan that best represents the meanings of the 3 keywords. 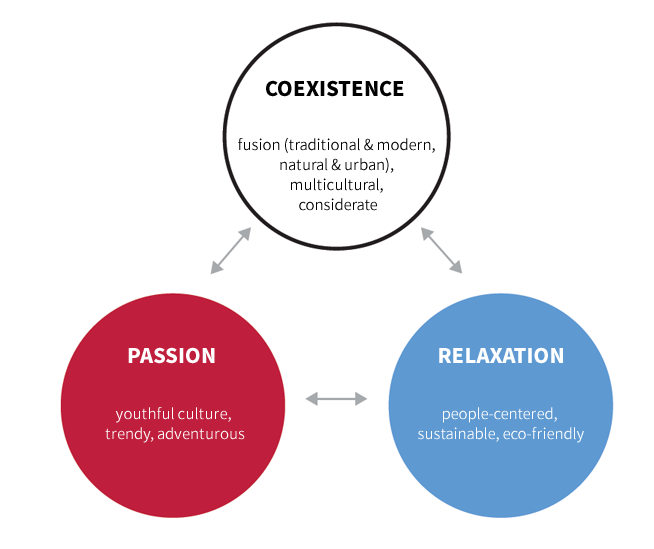 Surprisingly, a total of 16,147 works from Korea and around the world applied for the “International Idea Contest for the New City Brand of Seoul.” The number of submitted works was more than twice that of citizens’ works (8,064) for the contest for Seoul brand of “Hi Seoul” that was held in 2002, while recording the most entries not only in the history of domestic brand contests, but also of the all contests hosted by SMG. SMG was able to confirm again how much citizens were interested in creating a new Seoul brand and also to see how much citizens wanted the birth of a new Seoul brand reflecting Seoul’s identity.

In order to ensure fairness, SMG prepared various selection criteria (such as degree of Seoul identity reflection, originality, suitability, fidelity, correlation, scalability, formality and sophistication) and performed 4 steps of screening and examination by professional design companies, Seoul brand citizen selection committee, subcommittee to make the shortlist of Seoul brand, etc. In addition, SMG decided to proceed with citizen voting for the final choice of the new Seoul brand considering that the Seoul brand has to be made by citizens and enjoyed by citizens. Early citizen voting with the highest percentage of the total vote (50%) was conducted for 20 days on-line and off-line. In order to fully reflect the opinions of citizens, an on-site voting by the citizen judging panel (25% of total vote) was also performed on the day of Seoul brand selection event. As it was also necessary to consider the experts’ perspective, expert judging panel voting (25% of the total vote) was carried out.

On Wednesday, October 28th, ‘I·SEOUL·U (City of Me and You),’ which received the highest score after counting up all the votes, was selected as the new brand of Seoul at the Seoul Plaza, and then distributed all over the world. Professor Yu-kyung Kim, the vice-president of Hankuk University of Foreign Studies and Korea’s top authority on public brands, who participated in the event as a member of expert group, commented on the brand selection saying “the future city brands should be created with the concept of Doing instead of Being” and “a city brand open to interpretation is a good brand and the individual interpretation shall be respected.” Professor Kyung-deok Suh of Sungshin Women’s University, a public relations specialist in Korea, delivered his impression saying “The whole selection process looks very impressive and meaningful because citizens have been everywhere during the process to determine what Seoul-hood is, to give ideas based on which proposals were made and to make the final choice.”