Gangnam, Seoul is a town that takes pride in being the country’s center of culture, art, fashion, beauty, information technology, education, and finance. It also offers premium medical service that is on a par with others in the world. The Gangnam Style frenzy triggered by Korean pop star Psy has made people all over the world pay attention to Gangnam. Gangnam-gu, Seoul has become a favorite destination among foreign tourists, with more than 2 million visiting every year. On June 26, the Gangnam Tourist Information Center was opened next to Hyundai Department Store in Apgujeong-dong to provide more convenient, warm-hearted service to foreign tourists and respond to the global attention. No doubt, it will become a new landmark in the area.

Apgujeong-dong where the center is located is a place that offers convenient transportation (subway, bus, taxi) and boasts of many top-notch shopping centers and medical facilities. Sinsa-dong Garosu-gil (a boulevard lined with gingko trees) and Cheongdam-dong Luxury Goods Stores Street, which have become foreign tourists’ favorite destination, are located nearby. The first bus stop for Gangnam City Tour buses is in front of the center. The place also has parking lots for tourist buses for group tourists’ convenience. The Hallyu (Korean Wave) Star Street being constructed in Cheongdam-dong is expected to be linked with the center to play the role of The centerpiece of Hallyu tourism. The two-story Gangnam Tourist Information Center has total floor space of 820㎡. The Medical Tourist Center and the General Tourist Center on the first floor will focus on publicizing Hallyu contents, tourism resources, and medical tourism. The Hallyu Hall on the second floor will provide information on how to have hands-on Experience in Hallyu. The first floor consists of the ff.: ▲ Tourist Information Desk (providing visitors with information in English, Chinese, and Japanese); ▲ Medical Tourist Center; ▲ travel agencies; ▲ money exchangers; ▲ lounge, and; ▲ Service Desk (helping visitors make reservations or buy tickets or transportation card and taking care of their bags). The second floor houses the ff.: ▲ Zone for Hands-on Experience in Digital Technology; ▲ Zone for Hands-on Experience in Hallyu Stars; ▲ Zone for Displaying Hallyu Merchandise, and; ▲ Composite Beauty Zone. Commenting on the plan for operation, Ms. Lee Su-na, chief of the center, promised that they will provide foreign visitors with an opportunity to see the features of Gangnam aside from offering useful information and services. “We have prepared an array of programs for the hands-on Experience in Hallyu and medical tourism focusing on beauty as well as the country’s first-rate information technology,” she said. The Gangnam Tourist Center in Apgujeong-dong is the third one opened by the Seoul Tourism Organization following the two in Incheon International Airport and Myeong-dong, Seoul. The center plans to improve tourism infrastructure and develop diverse tourism contents to attract more tourists, including medical tourists, with the help of Seoul Metropolitan Government and Gangnam-Gu Office.

This center opened in November 2013. Myeong-dong is the top tourist destination for foreigners in Seoul. Every year, more than 6.8 million foreigners visit it. The opening of the center in Myeong-dong was carried out jointly by Seoul Metropolitan Government, the Korea Exchange Bank (KEB), and the Seoul Convention & Visitors Bureau. Under the multilateral agreement, KEB provides an office of the said center free, Seoul Metropolitan Government pays its operation expenses, and the Seoul Convention & Visitors Bureau takes charge of its overall operation.

Located at the site of Jangakwon, an office in charge of royal court music during the Joseon Period, the Myeong-dong Center had its outward appearance made after that of Jangakwon. It is expected that the center will play a pivotal role in storytelling-based tourism in Seoul

Providing tourist information through the largest leaflet wall in the country, a souvenir store, and event places

At the information desk of the Myeong-dong Tourist Information Center, visitors can get assistance about information on tourist destinations, real-time reservations for lodging and performance, and handling of complaints. Other major facilities include: an event stage, a lounge, and a desk for an internet-based information retrieval. Tourists who have experienced inconvenience due to rip-offs can get help right on the spot. The souvenir shop displays only good-quality tourist goods selected by Seoul Metropolitan Government. The leaflet wall is the largest of its kind in the country. It provides leaflets containing tourist information on Seoul, provincial cities of Korea, and major cities of the world. At the Chromakey Zone, visitors can have their photos taken with noted places in Korea in the backdrop using Chromakey and send them via e-mail right on the spot. Seoul Metropolitan Government also provides a space for displaying tourist information photos near the center. Commenting on the center, Seoul Mayor Park Won-sun said, “The key actors of tourism business are tourists and the relevant private businesses. Local governments are supposed to provide the infrastructure that will help the key actors carry out their roles smoothly. The program for establishment of a tourism infrastructure that uses resources of the private sector like this is a desirable one that will bring win-win results to all. I hope that the opening of the center in Myeong-dong will be the solid start of the tourism infrastructure project.”

DDP and Dongdaemun History & Culture Park, In September 2006, Seoul Metropolitan Government commenced the work of developing Dongdaemun History & Culture Park to preserve the historic significance of the site of Dongdaemun Stadium and present the city’s future vision led by the creative industry. Hadogam, a unit of Hullyeon Dogram as the military training agency in charge of training of troops and repair and supply of weapons and gunpowder, used to be located on the site during the Joseon Dynasty. A section of the Seoul City Wall used to extend across the area longitudinally. During the colonial period (1910-1945), the Gyeongseong Stadium (later renamed Dongdaemun Stadium) was built there in 1926, changing the landscape of the area. The Dongdaemun Stadium (a soccer field and a ballpark) was the country’s first modern sports facility but became dilapidated; the neighboring areas also turned into slums. Thus, Seoul Metropolitan Government decided to develop the Dongdaemun History & Culture Park there as stated in the foregoing.

Seoul Metropolitan Government held an international design selection contest for the promotion of the Project Dongdaemun History & Culture Park Project. The work Metonymic Landscape, designed by Iraq-born British architect Zaha Hadid (who received the Pritzker Architectural Prize in 2004), won the top prize. Judges praised the designer’s unique concept, which attempted to portray the history, functions, and landscape of the area through the seamless connection between artificial structures and nature and fascinating sight of atypical and asymmetrical curves and oblique lines entwining the entire building. Work on the 62,957m2 site was started based on the design. Composed of a park and DDP, the project was started in April 2009. Work for the park, which features exhibition places and green areas, was completed first; the park was opened to the public in October 2009. The park has two outdoor exhibition areas where historic relics unearthed on the site during the construction work are restored, History Hall where a restored section of the Seoul City Wall, Igansumun (water gates), and other unearthed relics are displayed, Dongdaemun Stadium Memorial Hall, and two mini-exhibition halls.

The Dongdaemun Design Plaza (DDP) is a 4-story building (with three basements) built on an 85,320m2 site. Located in the western section of the park, it will serve as a centerpiece of Seoul’s creative industries including design, fashion, culture, and arts. Construction work and preparations are underway for its operation under the vision of “Mecca of creativity and knowledge of the 21st Century.” DDP (set to open on March 3, 2014) is a workplace where design is applied to various fields to create new ideas, a school where talents are nurtured for the future, and a space where a better life is enabled. In particular, DDP introduces world design trends and design innovations and lets you see the past, present, and future of Seoul, Korea. At the same time, through DDP, you can understand the trend of Korea‘s fashion, sewing, and shoe industries at a glance.

Overview of DDP, which is under construction and is slated to open in March 2014

DDP is located in the Dongdaemun area, the gateway to the center of Seoul. Currently, this area has become Asia’s biggest clothing distribution area with traditional markets including Gwangjang and Bangsan markets and modern shopping malls such as Doosan Tower and Migliore. Likewise, the Dongdaemun area has historically been a place for communications and cultural experience. From here, DDP will open a new chapter. Moreover, in cooperation with local businesses, DDP will revitalize the local economy and pursue mutual growth.

Open 24 hours a day, DDP will provide a chance for Seoulites to see its own cultural attractions. Along with the Dongdaemun area’s continuous life cycle, DDP will be awake 24 hours a day. At the same time, DDP will show Seoul’s fashion trend. At night, DDP will unveil its new face with various cultural events, which will touch visitors’ hearts and creativity at the same time. Aside from cutting-edge technologies, DDP has space with analogue sentiment. Recreating 60 hot spots where history meets the present, DDP will provide various experiences. Ingansumun, Seoul fortress, and site for Hadogam will tell stories of Seoul’s history and add historic values to DDP. Seoul’s 600-year history is retold in DDP, and futuristic content is added to cultural assets. In this manner, DDP will offer a space where people experience time and stories. 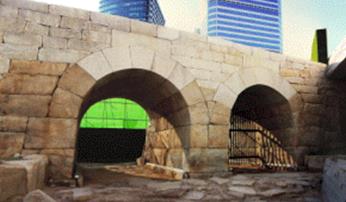 Night view of the Dongdaemun History & Culture Park, which was opened in October 2009

5 facilities and 15 spaces in DDP

DDP consists of art hall, museum, business center, park, and convenient facilities. As a space for fashion shows, concerts, performances, premieres, and new product launch parties, the art hall is at the center of DDP’s creative cultural content. Housing a special exhibition hall, a permanent exhibition hall, a permanent participation hall, and a design path, the museum is a space for creative exchange where you can see various trends featuring world-renowned designers as well as fast-rising ones. As a space where people share new information and trends and start businesses, the business center is divided into biz street, knowledge information center, academy hall, and designers’ lounge. DDP has on/off information platforms for business-friendly environments. In particular, the business street encourages Dongdaemun sellers, designers, marketers, and promotion experts to build the network. At the same time, it makes the information on sewing and fashion industries and provides legal or consulting services for buyers. “Creative Park in the City” greets visitors with Seoul fortress’s historic ambience and modern street furniture to comfort their tired minds. Open round the clock, DDP offers tourists and night owls various things to see and enjoy. In DDP, it is easy to find convenient facilities for tourists, women, children, seniors, and disabled. Especially for foreign tourists, the DDP information board provides clear information so that they can easily enjoy shopping and have a cultural experience. Furthermore, to make DDP a place for communications, various participative programs for artists and general public are planned.