A city with vitalized economy, we will discover a sustainable engine for new growth in the future.

We will focus on making “Green City Magok” a “base for the innovation of knowledge industry” which integrates high-tech convergence technology R&D cluster, botanic park and residential complex.

We will develop DMC into a hub of digital innovation industries where IT and digital media meet while also enhancing the competitiveness of Seoul’s financial industries through the clustering of Korean and foreign financial institutions in Yeouido. 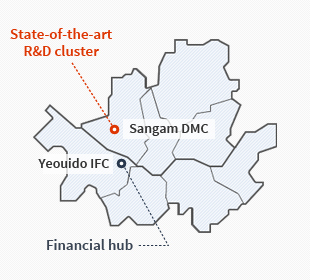 Create a hub of digital creation

2. Activate the attraction of foreign investment

Customized investment-attracting activities and investment-friendly environment will be fostered to enhance the vitality of Seoul’s economy and create sustainable jobs through the expansion of foreign direct investment (FDI).

Enhance the investment environment by establishing infrastructure for education

A source of quality manpower