Announcement of the 「Seoul Station 7017 Project」

The 「Seoul Station 7017 Project」 is largely focused on ▴significant improvement of the pedestrian environment through the renewal of the elevated road near Seoul Station, ▴facilitation of the urban regeneration of Namdaemun Market and the areas near Seoul Station ▴the remedy and resolution of problems related to communication, traffic, and safety. The city government is holding an international contest, from January 29 to April 24, for the submission of construction designs to turn this plan into a reality. The number 7017 is significant, as it refers to ① the historical elevated road created in 1970 and reborn in 2017, ② the renewal of the elevated road from a road for cars in 1970 to 17 paths for people, ③ a 17m-high elevated road created in 1970, and ④ the significance of being the first urban regeneration project aiming to transform the Seoul Station Overpass and the areas near Seoul Station into high value-added areas.

The overall renewal plan is to link the city center, within the four gates, to the underdeveloped region to the west of the elevated road near Seoul Station, to Seoul Station itself, the international gateway into Seoul, where over 390,000 people and 75 bus lines pass through every day.

The international design competition for the renewal of the Seoul Station Overpass was held from January 29 to April 24, 2015. Coming out on top was Dutch architect and landscaper Winy Maas with his winning design “The Seoul Arboretum.” The prize-winning work depicts the Seoul Station Overpass as a massive tree in the skygarden, creating a library-like collection of local plants arranged according to their names in the Korean alphabet, from Toegye-ro to Jungnim-dong. Street lamps will line the overpass like tree branches, organically linking the 17 pedestrian pathways that the Seoul Metropolitan Government requested be built.

Through this integrated renewal process, the government plans to revive Seoul Station as a “Bridge of Communication,” a place where people can gather and gradually disperse into surrounding areas. By connecting and integrating the areas, traffic, and culture in the eastern and the western parts of Seoul, which have long been disconnected, this proposal offers a new revival model for the dwindling local economies.

Integration of the area expected to reinvigorate the economy 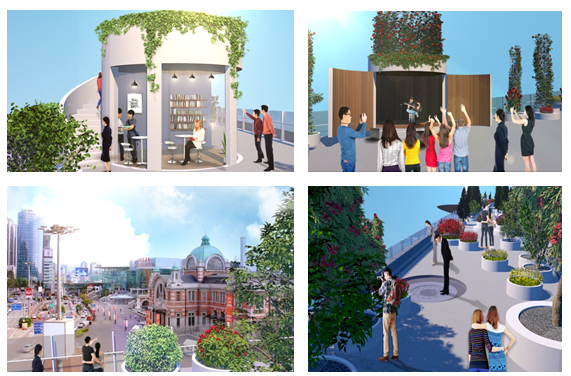