Mayor tours all of Seoul to resolve the district’s problems 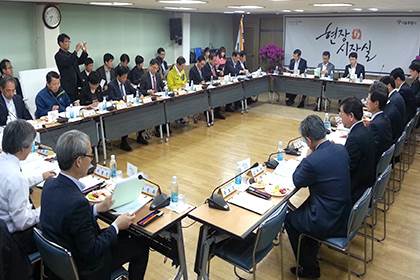 The Mayor's Onsite Office places an importance on on-site administration.The mayor’s on-site office started at Eunpyeong New Town. The mayor's on-site office was set up in Eunpyeong New Town in November 2012 to resolve the problem of unsold apartments. Over the course of nine days, discussions, on-site observation tours, and dialogues with residents were held, and solutions were explored to address the problems of unsold apartments, living and transport, and the environment issues. Consequently,

608 unsold apartments were all resolved.The mayor’s on-site offices were opened in 18 districts, such as Gangseo and Yangcheon in March 2013; Geumcheon and Guro from April to May; Yeongdeungpo, Gangdong, and Seodaemun in June; Dongdaemun, Seongdong, Gwangjin, and Gwanak in July; Jongno, Seongbuk, Gangbuk, Nowon, and Dobong in September; and Yongsan in October. In addition, the mayor’s on-site offices were opened for reducing debts (May), listening to the taxi transport operators (June), and preparing measures for boosting traditional market economies (June). Seoul Metropolitan Government’s policy for raising taxi fares was one of the group’s accomplishments.